Since it’s less than 2 months away, I thought I start a topic on anything and everything on the info of the Death Proof dvd. So post any info, pics of the dvd, etc. all the way up to the release on the best dvd this year! Unless they release a GRINDHOUSE dvd this year. LOL! Then that would be the best.

So any info for the upcoming DVD release can go here. 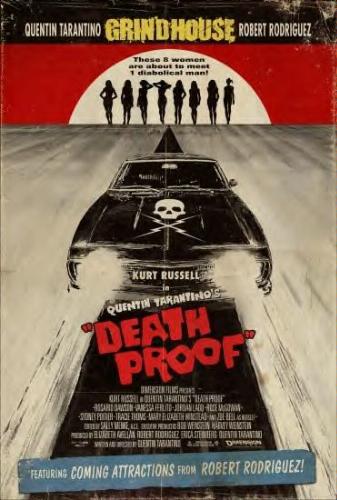 Haha, damn, you’re already talking about the DVD and it hasn’t even been released yet in the UK. Tut.

^ LOL. I NEED to see this movie again! LOL! But yeah, it gives me time to burn waiting for it to come out.

DVD’s have been cheap lately. It won’t be $50, more like $15. I bought the Reservoir Dogs 15th anniversary the other day for less than $10 at Target.

Dammit, I want to see Death Proof again. I guess I’ll have to impatiently wait for September.

Perfect birthday gift for me. BTW, that traditional cover-art is starting to look much cooler to me than the steelbook. But I guess I’ll decide on the day when I see these babies up close. Can’t Wait!!!

No, judging by most of Best Buy’s stealbooks its just like a case and when u open it theres a little plastic thing inside holding the two discs.

Here is what I just found on Wiki, so yeah…

“As well as the regular editions of Death Proof and Planet Terror being released, Best Buy will release an exclusive steelbook copy of both films, each containing a bonus disc. Extras on the 3rd disc are unknown at this time.”