The Girls With Guns thread

Watch In the Line of Duty 4, Its fun to see Cynthia Khan kick in her tight jeans. Too bad the lady she fights looks like a man.

[quote=“HostOfThreads”]
Watch In the Line of Duty 4
[/quote]

Already did. But she’s much hotter in In the Line of Duty 3.

For some nice girls with guns pics check this site:

Yes Madam (1985), released with 100 akaâ€™s around the world (including â€™In the Line of Duty 2â€™, and HKL dvd title â€™Police Assassinsâ€™), was Michelle Yeohâ€™s first film, and stands as one of the most classic 80â€™s HK girl actioners. Michelle is pretty incredible in the film, delivering some fantastic action and also performing her famous through-the-glass stunt without any professional help. Even better, she looks amazing in the movie, best Iâ€™ve ever seen her look. Michelle with glasses attached would even make most japanese 80â€™s teen idols pale in comparisons.

The big minus to me was Cynthia Rothrockâ€™s participation. She plays the second lead role and I pretty much hate that â€™nasty white bitchâ€™. But I do admit sheâ€™s highly skilled when it comes to martial arts. Maybe Iâ€™ll be able to tolerate her better next time. The rest of the cast is gold with supporting roles by John Sham, Hoi Mang, Tsui Hark and Dick Wei, plus an incredible amount of cameos including Wu Ma, Richard Ng, Sammo Hung and David Chiang.

The quality of action remains high throughout, with the emphasis being on hand to hand combat. Thereâ€™s some gunplay too but it doesnâ€™t fare that good compared to the martial arts sequences. As in many Hong Kong action films of the time, the humour is plenty and always less than intelligent. The general pacing is hyperkinetic to say at least. Classic film, good fun if you can’t tolerate Cynthia, and nothing short of excellent if you can.

Michelle with a gun

No need for stuntmen

I love these standoffs! That’s why I had to have one for my exploitation trailer, “The Hunt”(see signature).

I saw ‘So Close’ some years back and recall not thinking so highly of it. But lately I’ve been feeling like I should give it another chance.

Royal Warriors (1986), which was Michelle Yeohâ€™s second starring role, is also known as the first film in the â€™In the Line of Duty Seriesâ€™. The action, although not bad by any means, it not quite as insane as in Yes Madam, and unfortunately Michelle doesnâ€™t look nearly as cute anymore. But Cynthia Rothrock is gone, thank god, and replaced with Japanâ€™s cute boy (and Sonny Chiba protÃ©gÃ©) Hiroyuki Sanada. They even let him speak japanese instead of the usual forced canto dub.

Michael Wong is casted in his usual â€

This movie was way better than “Yes, Madam”. “Yes, Madam” suffered from some very pointless and annoying sideplots (Tsui Hark in a hyperactive and clown-like performance), with the action seldom exceeding a few kicks and punches here and there. Only the showdown is delivering the kind of action-mayhem one expects from the series. But sadly almost everything before is a drag.

“Royal Warriors” is pure, cheesy fun. The action-sequences are big, intense and long, the dialogue often embarassing and unintentionally funny, but in a kinda likeable way. Hugely entertaining, all the way.

The third one in the series is a bit underrated, in my opinion. It’s way more gritty, the action is more realistic and violent. If you love HK-Action, you won’t be disappointed. But it doesn’t have the overall impact “Royal Warriors” and the fourth “Line of Duty” (starring Cynthia Khan and Donnie Yen) had.

Cynthia Khan (no relation to Rothrock, thank god) takes over Michelle Yeohâ€™s role in the â€

People here seem to be so familiar with In the Line of Duty 4 that I donâ€™t know if itâ€™s any use for me to write much anything about it. But I do want to correct my doubts about miss Khanâ€™s martial arts capability. Here she proves that long takes are no problem for her, and also performs a stunt / fight sequence on top of a speeding van that goes directly to genre history books. Nearly equal in excitement is the jaw dropping end fight between Donnie Yen and Michael Woods. Michael Wong once again tries to slow the film down but thereâ€™s only so much he can do when director Yuen Woo Ping has edited out all the story scenes. This is a celluloid definition of what 80â€™s HK action cinema was all about.

In the Line of Duty 5 still stars Khan but unfortunately the quality has come down from the last two instalments. The movie starts moderately well, and the ending offers some decent action (inc. girl vs girl fight) but otherwise the second half drags. Cynthiaâ€™s hair style isnâ€™t very good, either. The only real improvement is that the foreign languages are back, with plenty of english and some korean, too. Overall decent viewing for fans of Cynthia, others can afford to skip.

How about any other Cynthia Khan films?

Dice, would you like to say a few words of Angel Terminators. I know you’re a big fan of it.

Whatâ€™s Elaine Lui + Moon Lee + Yukari Oshima? Thatâ€™s 150 bodies plus hellava lot of broken bones. Angel (aka Iron Angels) (1987) features not only one of the most bone crunching femme fatale finales ever but also some excellent gunplay. The scene where this asian Schwarzenegger and two female Rambos go for a rescue mission is in the league of Commando. The soundtrack features some kick ass tunes as well. On the minus side the first half is feels a bit slow, although Iâ€™m quite sure it will work notably better on repeated viewings, or alternatively if youâ€™re already very familiar with the main cast.

Highly recommended film for the genre fans. The recent Hong Kong Mei Ah remaster comes with a pretty good anamorphic image. Apparently there’s a Â½ second cut (Yukari Oshima’s body double’s breasts) but I guess most of us can get over that. That Â½ second can be found on the old Hong Kong laserdisc. I’ve read one or two comments about the disc having some playability problems but most people have reported no problems. My disc played perfectly too.

Elaine Lui can take care of herself, too

How about Girls with Cat III guns? Women on the Run (1993) proves that women can do kung fu nude. Uhm, oh well. The movie may sound cheap, but with Corey Yuen and David Lai sitting in the director’s chair (two chairs maybe?) the result is an entertaining action pack with a five star martial arts finale. Appart from some occational nudity and sex the Cat III rating also allowes one of the most unpleasently hilarious comedy moments in recent memory. Good stuff.

Haven’t heard some pleasing reactions to Brush Up My Sisters, but of course, the shots look good 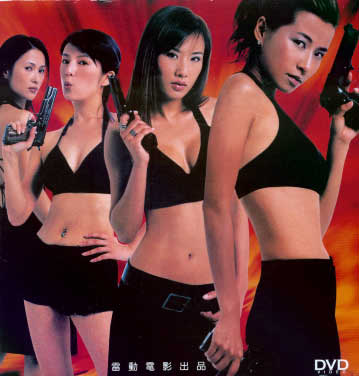 oh man, Brush Up My Sisters sounds promising (the title). And I can’t help but to like that pic too, even if those aren’t exactly my kinda girls.

[quote=“Hung Fist”]
even if those aren’t exactly my kinda girls.
[/quote]

So what IS your type of girls?