I finally got the UK disc now. i once watched it coz nice CPS lent it to me.

what i noticed is:

The UK disc has all kinds of problems. It’s cropped, the image quality is quite terrible, and I think the image is stretched no matter what aspect ratio you choose. I’ll check it when I get home. But the cover art is exellent.

Personally I’m dying to get the upcoming R1 disc (Animeigo) of Shogun Assassin. Even though I’m not sure if I’m ever gonna watch the film again. I love it, but like LW&C more… I don’t feel like SA is a rip-off, but if I want to see Ogami Itto killing 500 ninjas, then I prefer watching LW&C

I bought a three pack collection on ebay a couple months back. It included Shogun Assain, Lupin Wolf, and Lady Snowblood. I was sooooo happy to get it right away you could tell it was bootlegged the cover was copied . Shogun and Lupin played perfectly, but the last 10 minutes of Lady Snowblood it messed up. I complained about it to him and he sent me another one and it did the same thing so I didn’t even waste my time complaining about it again. I should have reported him. Anyway I was just reading about Shogun Assassin and it took me back to that day.

I’d rather watch the LW&C films than Shogun Assassin. I don’t see the point really.

Shogun Assassin is a kind of ‘best of’ compilation from the first two films. The backstory is taken from the beginning of Sword of Vengeance (20%) and the rest is from River Styx (80%). Of course they dubbed the film english, and also changed the soundtrack. The original films are “serious” chambara films, while Shogun Assassing more of a camp film.

[quote=“Hung Fist”]
Shogun Assassin is a kind of ‘best of’ compilation from the first two films. The backstory is taken from the beginning of Sword of Vengeance (20%) and the rest is from River Styx (80%). Of course they dubbed the film english, and also changed the soundtrack. The original films are “serious” chambara films, while Shogun Assassing more of a camp film.
[/quote]

I’ve only seen the first two LW&C films but I think Shogun Assassin is much better. It adds a nice contrast to the story: a naive, little boy as a narrator companioned with the upbeat music and at the opposite end we still got the same revenge story and a shitload of killings. It’s almost like watching a fairytale.

looking forward to the new dvd.

The cover art isn’t too bad, though I prefer the wonderful UK cover:

I can’t wait to see this in good quality. now i have to find some idiot to buy my vipco’s dvd

I already did (no offence to the person who bought it) ;D

The quality should be very good as Animeigo’s LW&C discs were great. Slightly too strong colors, but otherwise great. I’m not 100% sure about this but I think I heard they are using the same elements (possibly re-creating SA from their LW&C masters). I could be wrong about this, though.

[size=90]You asked for it! You begged for it! You even threatened us about it! But it wasn’t until a concerned Mom called us about a matter of life and death – her daughter Ã¢â‚¬Å“B.B.Ã¢â‚¬? needed a good copy of her favorite bedtime movie – that we knew we had to do it. After all, the life and death being referred to was probably our own!

AnimEigo is pleased and proud to release the official release of the most deliriously violent, the most outrageously bootlegged, and the most infamously famous Samurai film of all time – Shogun Assassin!

Academy Award-winning (*) Director Robert Houston’s epic grindhouse mash-up, created by slicing and dicing the first two Lone Wolf &Cub movies, is now available in an officially licensed, 100% reconstructed edition. It’s the tender tale of a mighty swordsman trying to balance his career as an assassin with the problems of being a single dad while being stalked by legions of extremely hypertensive ninjas. In other words, if they actually let the plot get in the way of the gratuitous bloodletting, it’d be one serious chick-flick!

See the film that inspired a generation of film-makers to make movies that your Mom would most definitely not approve of!

See the most famous Samurai movie of all time – that the Japanese have never heard of!

See the movie that you’ve watched a million times, but never really seen – because you bought the crappy bootleg DVD!

It’s the one… the only… Shogun Assassin!

This July, the aisles of your favorite video store will run red with blood![/size]

And this is pretty impressive

[size=90]Rumors have reached us that some people have been foolish enough to buy bootleg copies of Shogun Assassin. We know you’ve been horribly disappointed by how bad they are, and despite the advice we got from the Lone Wolf himself (Ã¢â‚¬Å“Slay the dogs where they standÃ¢â‚¬?) and the Cub (Ã¢â‚¬Å“Make them pay retail!Ã¢â‚¬?) we’ve decided to be merciful and provide a way for you to upgrade to the Official edition for a mere $10.00

If you have a bootleg copy of Shogun Assassin, fill out our Amnesty Application and send it in, along with your bootleg disc and your penance. We’ll send you the gloriously reconstructed Shogun Assassin by US Mail!

But beware! This offer is only good during the long, hot days of summer! [/size]

That’s for US (and maybe Canadian) customers only. More info (and pics and a trailer) at: http://www.animeigo.com/SAMURAI/SHOGUN_ASSASSIN.t 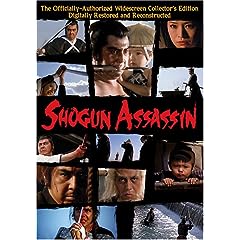 Why doesnt the new dvd have original language with english subs. This is no better than the burnt copy I bought on ebay, except maybe the extras. I dont know If I should buy It, I really hate movies that do the dubbing shit.

Was that a joke?

English is the original language. No japanese version exist.

why does It say english dubbed on the back for?

Shogun Assassin was created by cutting together scenes from the first two Lone Wolf and Cub movies. About 20% of the footage (the back story) comes from the first film and the rest from the second. They also changed the order of the scenes, made some further edits to some scenes, created a new soundtrack, dubbed the film in english and added a voice over by Daigoro.

That’s why they said “See the most famous Samurai movie of all time – that the Japanese have never heard of!”

I get It thanks.