Just finished watching this and really enjoyed it so i thought i would post a thread about it. Anyone else seen it? I thought it was well scripted, good acting (Bruce Cambell is the man), and great directing. I thought the no cuts filming and editing style gave a very good touch to the film. 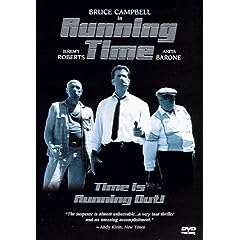 “Running Time was filmed in black and white, in real time, and seemingly takes place in one continuous, fluid shot. It’s a little like Hitchcock’s “Rope,” but it’s on location! Carl, an ex-con who sets out to rob the prison laundry system where he worked for 5 years (while in the pen), has spent ten years in prison planning the ultimate heist. Upon his release, he meets up with a high school buddy, who’s made all the arrangements for the job, and rented him a hooker for his first encounter in a decade with a real girl. After picking up the safecracker and their getaway driver, they’ve got twenty minutes to pull off the perfect heist…but soon everything falls apart before Carl’s eyes. He might still get the girl, though!”-IMDB.com

Yeah, I saw this a few years ago on IFC great movie. If I remember correctly they

only used one cut in the entire film.

yea its been compared to rope, although i like killing zoe this film is 100x better than it.

Huh, sounds interesting, I’ll have to check it out.