Quentin Tarantino Hints That He Might Tackle U.S. Slavery

Quentin Tarantino Hints — Again — That He Might Tackle U.S. Slavery One Day 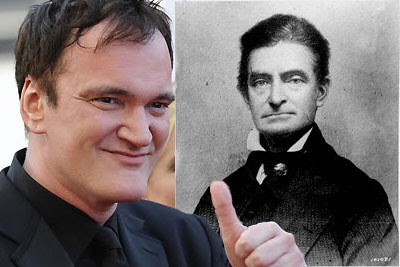 Quentin Tarantino was on the Charlie Rose show last week (you can watch it in full here, as pointed out by Vulture and /Film) once again to promote his WWII drama “Inglourious Basterds,” as he ends up on the show for pretty much everyone of his movies (“At the writing stage I look forward to coming to this table and talking to you,” Tarantino told Rose affectionately and enthusiastically).

Per usual, it’s an hour long chat and many topics are covered. However, as Vulture just noticed (and something we were taking notes about last night), Tarantino has expressed his interest in writing about the history of U.S. Slavery again.

Tarantino was discussing his dislike of biopics (which typically don’t interest him), but he gave an example of one that might: American abolitionist John Brown, who unsuccessfully tried to cause an armed slave revolt in 1859. “There is one [biopic] story that I could be interested in, but it would probably be one of the last movies I [ever make],” Tarantino told Rose. "My favorite hero in American history is John Brown. He’s my favorite American who ever lived. He basically single-handedly started the road to end slavery and the fact that he killed people to do it. He decided, ‘If we start spilling white blood, then they’re going to start getting the idea.’ "