We’ve all got our, “THAT scared me when I was a kid. Had to sleep with my Glo-worm light at night.” stories and I feel it is fit to begin a thread to talk about what made us go, “aaaaaaahhhhh!!!” when we were children. It could be anything. A film, a pop song, a book, a comic, a person, a toy…absolutely anything.

(based on his Captial FM radio serial). It was made by Cosgrove Hall who later made Dangermouse, Count Duckula and Alias The Jester (along with Chorlton and the Wheelies, Jamie and The Magic Torch and Robin and Rosie Of Cockleshell Bay). In one adventure Captain Kremmen landed on a planet and he met The Mud Men.

The Mud Men frightened me at the age of five because they looked like living excrement!

A few things scared me when i was a kid…

I think i cried when i watched “The Black Hole”, I was so afraid of the world blowin up, cuz i was stupid.

“The Terminator” scared the shit outta me.

I was scared of astro boy! Its strange because now I LOVE anime!

I was also scared of fans. My auntie told me they can chop my hands off. (But fans aren’t really popular culture, are they?)

Take the Money and Run gave me nightmares for 28 years.

I had reaccuring dreams, one where Ernie chased me through my house with a knife; the other where the count killed me when I couldnt rembember the special number and letter of the day…people, puppets are evil!

Speed Racer, Barney, and the Power Rangers; all scared the Ba-Jesus out of me when I was a kid.

Now that I’m a young adult I realize that they’re just faggots.

I had reaccuring dreams, one where Ernie chased me through my house with a knife; the other where the count killed me when I couldnt rembember the special number and letter of the day…people, puppets are evil!

YES! that show was extremely scary to me

there was this television series, i forgat the name, with a dinasour family. I was really scared of it when I was a child. The dad worked in a forest cutting trees, and he had a really scary boss and everybody was afraid of him. The baby of the dinasour family was scary also.

and I remember being scared of Alfred Jodokus Kwak (a dutch cartoon) I remember the story always ended bad.

haha that was simply called "Dinosaurs"

that grandma looks straight out of the texas chainsaw massacre

um i saw the rocky horror picture show when i was like 9 and it scared the crap out of me…well actually it wasnt so much that it scared me, i just didnt know what the hell was happening! but now i enjoy it

I don’t scare easily, the only scary thing I can think of is this programme we watched in school when I was like 7 called Through the Dragons eye (how the fuck do I still remember that name?) and it had this scary bird thing in it.

Haha, I just looked it up on the net and it’s there. Shit, it brings back some right memories. It was a good programme, the story was cool. 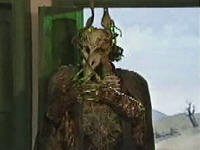 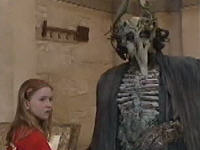 Candyman scared me from mirrors.

Ghoulies scared me from toliets.

Nightmare on Elm Street scared me from beds.

It scared me from clowns.

Clintons Impeachment scared me from republicans.

oh god. me too. but i loved it even though it scared the crap out of me.

I loved that Dinosaurs show. I was scared by, Candyman, Children of the Corn, and this movie Slaughter of the Innocents.