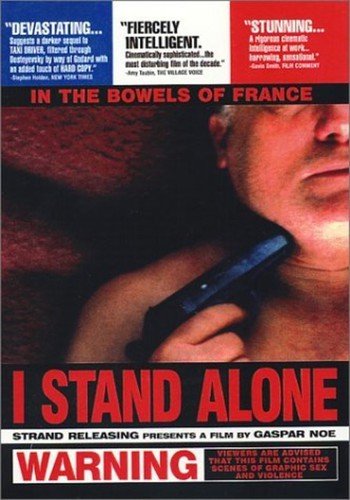 anybody seen this movie? i just got done watching it and it’s pretty twisted. it’s told from the point of view of an out of work butcher. he hates everybody and everything in the world and is trying to find a way to get back at them. most of the film is narrated by the butcher in a type of internal monologue where he talks to himself. Gaspar Noe directed this and he also directed Irreversible. this is a pretty twisted movie, so if you like that kind of thing, this may be a winner.

anybody else seen it?

is it released in the u.s.?

yeah, i had to order it from a Borders Books and Music because it was out of stock, but it is readily available in the U.S. Amazon.com also has it.

how disturbing is it and what would you give it out of 10?

it’s not really disturbing as much as it’s just twisted. i wasn’t really bothered by any of it, but the ending def had a twisted part (not REALLY twisted, but twisted enough). before the actual climax of the movie, a warning came up as the narrator was speaking, and it said that it was giving any audience member who wanted to leave 30 seconds to exit the theater and it counted down on the screen. that was cool. out of 10 i would prob give it a 7. not disturbing, just twisted.

Well, the stuff I already heard from I Stand Alone reminds me on Taxi Driver. A lonely character who breaks out in the final minutes, well, the bell rings

. A German label just released the film. Perhaps I take a look, I liked Irreversible, but its not that important.

I think that I STAND ALONE is a pretentious piece of crap. And it 's also very boring…

how is I Stand Alone any more pretentious then Taxi Driver?

yes, these films are a bit alike, but they are also VERY different. i can see how much of I Stand Alone can get heavy handed in its themes (Noe does HAMMER them into your head through repetition) but i wouldn’t necessarily lable it as “pretentious”. as for the boring part, the monologue kept me in the movie, although the fact that the monologue is repetitious does give the movie the possibility of being boring. to each his own i guess, this movie isn’t great, but it’s an interesting watch IMO.

I just watched this and I really liked it. I didn’t think it was boring or really that twisted. It’s kindof the same idea as Taxi Driver but done completely different. I haven’t seen Irreversible yet, which one is better?

[quote]I haven’t seen Irreversible yet, which one is better?[/quote]
Irreversible is a whole lot better.

[quote=“Hisayasu S”]
I think that I STAND ALONE is a pretentious piece of crap. And it 's also very boring…
[/quote]

Ditto. Skip and see Irreversible, that film has some messed visuals and material, including one of the most sickening and stomache turning rape scenes ever. I Stand Alone is far overhyped and has too many slow scenes that achieve nothing at all for the film neither the lead character. It is like following the life of a bum that eventually goes postal.