Anyone seen this or heard of it? This is supposed to be one of the most intense and scariest movies ever. It came out a while back in France and people have been raving about it ever since. I don’t know much about the story, just that 2 girls witness their family being very brutally murdered and chaos ensues. I’ve read several people complain about the Sixth Sense type ending, but I still really want to see it and i’m gonna try to watch it whenever I can find it. For more info, look on google or aintitcool

it’s rated NC-17, so that means lots of carnage ;D

but i read a review of it that said that the movie was only good for the first 50 minutes or so, and everything after that sucked. here’s what it’s about:

Two female students, Marie and Alex, set off to Alex’s parent’s secluded homestead in the country to relax and study. Come nightfall, Hell pulls up at the front door. Alex is now bound and gagged, taken off, with Marie alluding the intruder. Can she save her friend’s life in time? Or is everything all that it seems…

this sounds like the german movie FUNNY GAMES which was fucking awesome. Haute Tension however sounds like it has a bad ending… 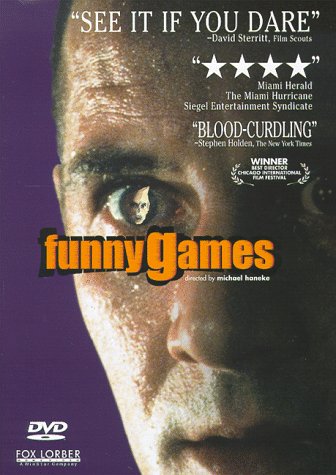 it took me a while to find this movie, but when i did i bought it, and it’s good. it’s on IFC sometimes (although not too often). the ending is crazy…this movie is worth it to see.

In Funny Games Georg and Anna, with their son Georgie, are traveling to their lakeside summer home. Upon arrival, Georg and Georgie head off to the lake for sailing while Anna prepares dinner in the kitchen. The serenity is shattered by a young man named Peter, who knocks at the door asking to borrow some eggs. The unwanted visitor is joined by Paul, a brash, arrogant young man. It soon becomes clear the pair have no intention of leaving. When Georg returns and tries to throw them out, physical violence erupts, and the family is held captive. What ensues are highly disturbing and violent ‘games’ initiated by Paul and Peter with Georg, Anna and Georgie as the unwilling participants.

HAS ANYONE ELSE SEEN THIS?

EDIT: this is a german board, and this movie is german made, someone here must’ve seen it…SEB?

Indeed, “Haute Tension” is a bloody good rollercoaster ride of a movie (by the way: the director of this sadistic piece is just 25 years old). Very gripping atmosphere and pretty gruesome F/X (escpecially for a movie of these days). And yes, the ending is a little bit strange, but it doesn’ t suck.

We had an older HT topic with only 2 posts, so I deleted the older one:

I just saw this the other day and I must say that this movie fucking kicked ass. It was extremelly atmospheric, gory, frightening, and intense. One of the best horror movies I have seen in a very very long time. In case you want to see it the film is called Haute Tension or Switchblade Romance in the U.S. (2003) It’s directed by Alexandre Aja and it’s a French film so make sure that the copy you watch has english subtitles. There are also 2 versions of the film, one which is cut and one that is not. Definatly get the uncut if you can. The Korean bootleg is cut so beware.

I really really want to see this. I read a review at dvdmaniacs, and it sounds topnotch and full of scares. I’m gonna have to buy this soon.

High Tension really looks amazing. i gotta see this… if you’ve seen the UNrated trailer, you know what i’m talking about

I saw Haute Tension last night with a friend and i must say that it kicks some serious ass. As soon as the dad was beheaded my stomach curled and my heart started beating way too fast and didnt stop till the end. The score and acting was great, and its was fucking bloody as hell.

The only bad part was the ending. They tried to pull a Sixth Sense-type mind fuck thing and it fell flat on its face. And if you know theres supposed to be a big twist then you can figure it out in the first 15 minutes. SPOILERI would have prefered, i dont think i spelt that right, if the garage guy was real but oh well.

All in all i really enjoyed it.

I’m I the only one who liked the ending? It fits perfectly for this film and genre. After all, the whole movie was a kind of analysis of slasher genre (just like KB Vol.1 was about martial arts films). Besides, I didn’t find anything illogical about the ending. It’s a long time since I last saw the film, so I could remember incorrectly, but here’s my view:

[color=beige]At the end of the movie, there was no two cars. The truck was the only car in those scenes. The main character had twisted personality, so she was imagining how she would save her friend from the killer. But in reality, she was the killer, and she was the one driving that truck.

just saw this movie last night. my friend is a huge horror movie buff, and to boot he doesn’t usually watch foriegn films, but said that this was one of the best horror movies he’d seen in years. It’s true it’s very atmospheric, great cinematography and composition, decent story, everything is believable. I even liked the ending, though it had been done several times in the last few years. But my problem is the continuity problems with it after you throw in the ending.

Like were did the van come from? The girl did not drive there, she was driven.

She also had some gear for the killings, how did she get them?

Why was the killer shown with the decapitated head (one of my favorite opening scenes from a horror movie by the way) when the killer was the girl, and she was in the car with the other girl?

What did she chase down, or get chased down by? Did she just unreasonably drive her van into a tree due to her imagination?

Sure there could be some explainations for these things, but none are really what I would consider to be good ones.

But like I said as a movie that you just sit down and watch, without analysing (force of habit, I’m afraid) it’s a really good movie, and I look forward to Aja’s remake of Hills have eyes, even though the idea should be blasphamy, I think he might be able to pull it off.

He’ll probably make it perfectly then at the end it will all be a dream then when they wake up someone chops of their head with and axe, but that person with the axe is the person who woke up and upon realizing they with jump out the window onto a fence, but the fence is candy canes.

Fuck Aja for that god damn stupid ending that ruins the whole movie! Watch me pull chains out of my ass WHEEEEEEEEEEEEE

Like I said though, even though the ending has been used alot in recent years, I thought the idea would have worked, and kindof liked it. But the main problem I had was that it fucked up the continuity. I hope he doesn’t fuck up Hills, cause the original is such a classic. I was really leary of it until I saw High Tension. But I think if he stays to the actual story it could work really well.

I don’t like the idea of these remakes being made, but I got to admit, most of them have exceeded expectations. Some have been attached to some really cool directors.

Dawn of the Dead - awesome

Texas Chainsaw Massacre - better than expected, but nowhere near classic

this movie is awsome

The ending ruined the film for me. If I ignore the ending then it is an incredibly tense and enjoyable film, but the end just doesn’t make any sense.

I don’t see why eveybody got so upset about the twist at the ending. My only problem was that much of the suspense was gone once you found out who the real killer was, and they didn’t even really try to explain anything at the end. It ended so abruptly, I was like “uhh…is that it?” But this was just supposed to be a fun slasher; it’s not like Aja was remaking The Godfather or anything. I honestly didn’t care about the characters enough to get pissed off by the climax of the film.

They didn’t explain it because, without a doubt, it couldn’t have worked. Seriously whos car flipped? Where did the chains come from? The gas station scene?

If you go by the logic that it was all from her viewpoint and half of it was just her fucked up fantasy, then it could make sense. I still would have liked some kind of explanation by the doctor at the end, maybe a two minute monologue or something. The way it ended was retarded, like the director just stopped giving a shit about the audience and couldn’t find any other way to end it.

I’ll try to explain this again: She’s a psycho, she has a twisted personality. She is a killer, but due to her twisted personality she is constantly having this fantasy of herself being a heroine. But that is all fantasy, the good heroine does not exist, there’s only the psycho.

Since the heroine does not exist, there is no two cars at the end. There’s only the big van. She’s driving it, and having a fantasy of someone trying to rescue her friend. Then she finally crashes.

The beginning of the movie is “true”. When she walks out of the house, she watches her friend taking a shower and gets jealous. That’s when she turns into the psycho. She never goes back in, instead she goes somewhere to get that big van and comes back and starts slaughtering people.

And I don’t understand why everybody hates the ending. Even without knowing anything about the genre, I can tell it’s a classic twist. And since, above all, Haute Tension is a homage to slasher movies, it makes perfect sense the movie ends like that.

I have to totally agree to Hung Fist. I like the movie as well. And especially the twist at the end is great. Good flick!