picked this up from IGN.com 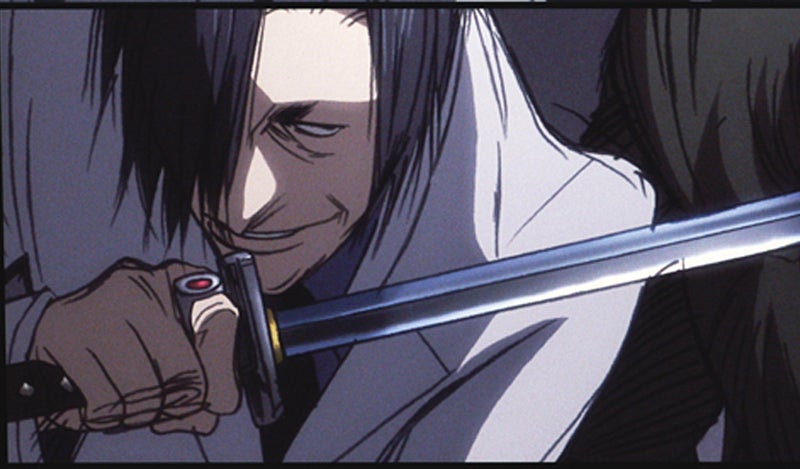 and WHO would that be? are you sure this is from Kill Bill? i dont like it…

I would imagine that is a Yakuza

[quote]and WHO would that be? are you sure this is from Kill Bill? i dont like it…[/quote]
check out IGN

A still from the film’s anime segment…

September 16, 2003 - In Kill Bill, Uma Thurman stars as the Bride, a former assassin betrayed by her boss, Bill (David Carradine). Four years after surviving a bullet in the head, the Bride emerges from a coma and swears revenge on her former master and his Deadly Viper Assassination Squad (DiVAS). The Bride travels from the El Paso backroads to Pasadena suburbia to Okinawa sushi bars to the Tokyo yakuza gang territory hunting down the gang’s members, played by Lucy Liu, Vivica A. Fox, Daryl Hannah and Michael Madsen.

Another thing that fans can expect is a bit of anime in the film. There’s at least one animated sequence in the movie that tells the origin story of Lucy Liu’s character. We’re not sure about the other sequences, if there are any, but we’ve scored an exclusive first look at the anime from the film (see below) Ã¢â‚¬â€œ I’m gonna go out on a limb here and guess that that’s Bill (he’s played by David Carradine in the film). The animation was apparently done by the same studio that does Ghost in the Shell.

Uhh…Bill?! I very much doubt it.

.[/quote]
Youd think theyd at least try to make an educated guess, ie. Ã‚Â look at a picture of Carradine and realize that he doesnt look like that in the slightest

[quote]
Youd think theyd at least try to make an educated guess, ie. Ã‚Â look at a picture of Carradine and realize that he’s not asian
[/quote]

Well, whether or not that man really is intended to be Japanese is debatable, but the thing is, it just doesn’t resemble Bill at all. Things like the grin, the hair, and complexion just donÃ¢â‚¬â„¢t resemble David Carradine.

I think it is possibly one of the Yakuza bosses or something. I am really not sure because QT changed a lot of little things from the first draft (i.e. Giving the young character of Miki of the Crazy 88 some more screen time) and added a lot of completely new scenes. Who knows.

but since the sequence is reportedly 10 minutes, theres prolly tons more animated segments in the movie then were on the script

and Hey, do you notice the sketchy style of the drawing, maybe thats because the anime evolved from the Brides charcoal sketch of O-Ren.

This may be the style their going with folks, i would have preferred a traditional Anime look like Ninja Scroll - but this seems to be more sketchier. I dont really like the look of it but its only 1 pic - we havnt seen much. Give it more hope - afterall it may be somewhat decent.

I just watched some new Animated scenes from the new trailers, looked a little like Cowboy Bebop. Was AWESOME.

Somebody with a sniper rifle (the bride?) shooting at limousines… amazing.

I think that pic looks very cool!! 8) Looks like another assassin, a Japanese guy. Or maybe its Bill when he was young. Who knows?

I think it’s a pretty cool picture (and a pretty cool guy). look at that sadistic grin on his sneaky face. Hope to see more of this stuff soon. ;D

I’m guessing that RZA’s “Ode to O-Ren” plays during this sequence ;D

I don’t really like that picture. However, i fully trust Seb and if him simply saying the anime sequence he saw looked cool makes me even more anxious to see it. It will probably look a lot cooler in motion.

There are new pics up at AICN of the anime in Kill Bill. It doesnt look like the pic posted here, it looks more like some fucking wicked traditional Ninja Scroll type Anime! It looks fucking sick! My faith in the anime has totally been restored!

These are the pics from AICN.

I like these a lot more than the first one by banana.

wow, these are much better. I like it a lot ;D

now lets see them in motion.