In the New York Times…

Tried finding another link, but it asks you to pay for access!

Is there another link to it?

yeah; could you copy and past the article?

ENTIRE ARTICLE WAS EDITED AND PUBLISHED BY THE ADMINISTRATOR AND IS NOW AVAILABLE AT:

Thanks for taking the time to post that. It was a great read. Now I want to go out and rent some of those movies they mentioned. ;D

thank you for posting this. you could’ve as well sent it to me, because, I’ll delete this posts anyway and replace them with a link to the article, because I’m gonna publish this on the main website.

That was some awesome stuff to read. Great find Jeff!

QT mentioned the book WW and The Dixie Dancekings, that movie version is one of my favorites! I dont think alot of people have seen it, but if you can find it, check it out. Ive never read the book.

I liked the parts about him getting his typewriter from Grace back, his mom not getting a house. haha. And his childhood crush Tatum O Neal became Somerset O Neal in his own Afterschool Special script (later part of the Fox Force Five).

That crosstalk is one of the best things Ive read so far on the board.

good stuff - thanks for sharing!

any interesting pictures accompanying this article? 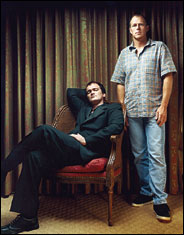 This is the only one.

holy shoestrind Helgeland was paid $5,000,000 for writing A Knights Tale - he must be minted, looking at his resume his written or directed a lot of films, I bet hes made about $30+

What does someone who spends all his time making films do with with all that money?